The figure for deployment within the latest month should always be taken as highly provisional – it is likely to be revised upwards as further data are received on newly operational sites.

At the end of March 2020 (end Quarter 1), 57% of capacity (7,695.7 MW) came from ground-mounted or standalone solar installations.  This includes the two operational solar farms to be accredited for Contracts for Differences (Charity and Triangle solar farms). 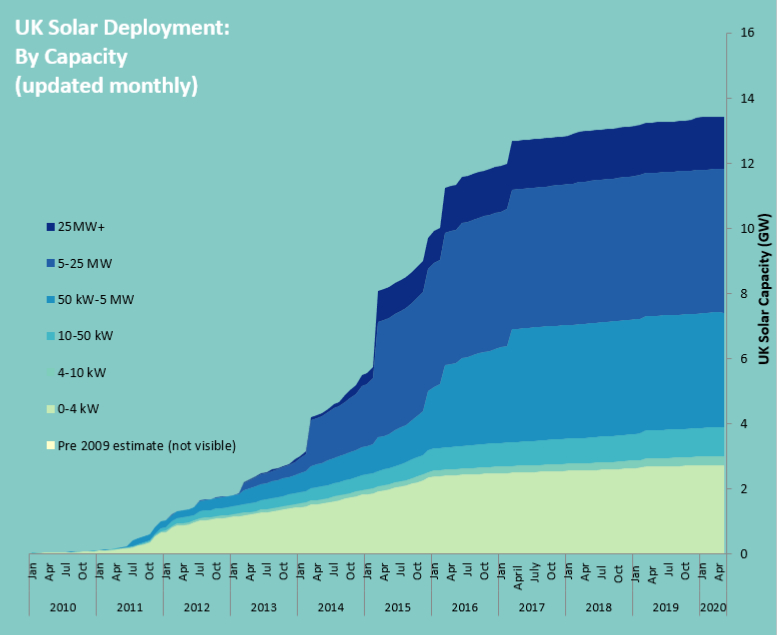 10.06.20 – Has Coronavirus been good for clean energy, whilst renewables are helping the British economy recover?

THE ARTIC IS BOILING

The Arctic is stewing in temperatures more than 45 degrees above normal.

The huge temperature spike is another striking indicator of its rapidly Transforming climate and
demands an immediate response by politicians and policy makers to push a rapid transition out of fossil fuels now.

More UK businesses are moving their commercial energy to renewables, such as solar.

Speak to Footprint Zero about the many advantages of making such a critical change.

HAS CORONAVIRUS BEEN GOOD FOR CLEAN ENERGY, WHILST RENEWABLES ARE HELPING THE BRITISH ECONOMY RECOVER?

Both these points are increasingly being mooted across the entire UK ecopolitical and industrial landscape as we emerge from the turbulence of the Covid 19 pandemic.  Analysts, economists, industrialists and environmentalists alike are claiming that the renewables industry might well play a greater role in powering an economic recovery and boosting cleaner energy.

A combination of the collapse of traditional fossil fuels, as well as renewables dominating the grid (May was the least carbon intensive month ever), underpinned by a genuine global sentiment for a sustainable, cleaner world brought about by lockdown, is propelling renewables to the forefront of investment and infrastructural desire.

Moreover, the Chancellor’s pledge on the eve of the pandemic to double the size of its energy innovation programme, was well timed in securing a  genuine drive by those organisations harvesting energy from the sun, wind and sea, to boost the UK’s economy by generating massive investment and creating thousands of jobs, whilst accelerating Britain’s climate ambitions as we race towards a NetZero position by 2050.

And in recent weeks, we’ve seen a collection of heavy-weight industrialists, financiers and lobbyists, pushing for a meaningful and definitive renewables strategy and intensive investment agenda.  Afterall, according to the Confederation of British Industry, in the wake of the financial crisis of 2009, Britain’s clean energy sector contributed a third of the UK’s economic growth in 2010-11.

A decade later and much of the risk borne by investors in renewables has diminished, as have the costs of the clean energy technology.  The International Renewable Energy Agency (IRENA) reports that the cost of solar PV globally dropped by 82% and fell by 13% in 2019 alone; and since 2010, the cost of concentrated solar power also dropped by 47%, while onshore wind costs fell 40% and offshore wind 29%.

Renewable energy is fast becoming the cheapest source of new electricity, offering tremendous potential to stimulate the global economy and get people back to work, and renewable investments are stable, cost-effective and attractive, offering consistent and predictable returns while delivering benefits to the wider economy.  So unsurprisingly, UK business users and financial institutions are both much more confident and willing to invest.  Add to this the many tangible benefits delivered by investment in renewables, including improving CSR and ESG, significant utility cost reductions and revenue generation.

Employment in the UK’s net zero space could increase by 85% over the next decade according to a March report by the Renewable Energy Association (REA).  These include clean energy/ energy efficiency, electricity networks, car-charging infrastructure, solar and wind, as well as other associated specialist and peripheral roles.

With the possibility of as many as 1.4 million people being left unemployed following the pandemic, an employment surge in the renewables sector would not simply dress a serious wound, but support a broader recovery, whilst driving our clean energy targets.

PLEASE LISTEN  – WE KNOW WHAT WE ARE TALKING ABOUT

Lockdown has found us in a collective moment of reimagining, but this will not last for ever: we should use it to ask what economic activity we want to rebuild, and what we could do without.

The UK needs to invest an additional £30bn a year in shovel-ready green projects to create jobs, energise the post-lockdown economy and put the country back on track to achieve its climate targets, a new cross-party commission recommends.

So this is precisely the moment to think beyond a blind pursuit of GDP, but about what kind of economic activity to bring back and prioritise, and what we could do without. Any stimulus package must be tailored to create not just any economic activity, but that which will serve society best.

The recent 96 page paper from the Environmental Justice Commission recommends ending the UK’s policy of maximising the economic extraction of oil and gas in the North Sea and elsewhere and shifting more resources to job creation in construction, manufacturing, renewables, broadband rollout and electrification of the heating and transport sectors.

They list nine policies that could accelerate the recovery from Covid-19 and put the UK on a healthier environmental track. Any bailouts for struggling firms should be conditional on reduced emissions, particularly in the airline industry.

200 CEO’s of the UK largest corporates unite in their recent letter to the Government demanding that “efforts to rescue and repair the economy in response to the current crisis can and should be aligned with the UK’s legislated target of net zero emissions by 2050 at the latest”.